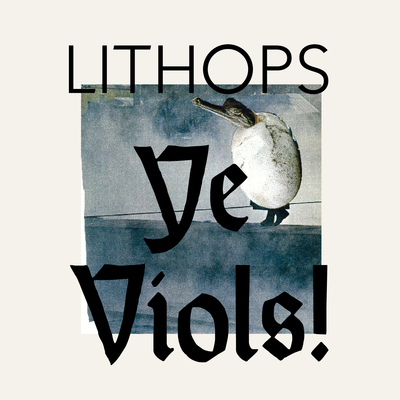 Ye Viols! Is the fifth release from Lithops, one of the several projects of Jan St. Werner best known as one half of German electronic crew, Mouse on Mars. Before my initial sitting of this record, I hadn’t realised that all the pieces on this compilation of sorts were in fact the sonic accompaniment of a variety of art installations, so learning this did put the amorphous nature of this record into perspective. While Werner’s previous work does leave the occasional fingerprint on Ye Viols!, with some of the bloops, zips and crackles providing an odd reminder of the more melodic and dance-friendly sounds of Mouse on Mars, the Dusseldorf synth nerd drags us through predominantly abstract and formless territory.

The instrumental thematic elements of Ye Viols! unify the tremendous versatility and eclecticism of an extraordinary variety of art media that St. Werner has provided his accompaniment. “Graf” provided the sounds to sketches and of contemporary architecture in Amsterdam, with the harmonic buzzes and rhythmic clicks and clacks serving well to complement said feats of construction and engineering. The eerie atonal ambient piece “Bacchus” is a sonic backdrop for artist, Illui Nonobac, who is also behind the album art, while the computerific tones of “Handed”, a delightfully quirky cluster of accordion-like noises, the backing for an exhibition of artists Rosa Barba and David Maljkovic in Dublin. The frantic beat-happy, video-game-effect-esque two-parter “Apps” is the soundtrack for a 35mm film also by Barba. And finally “Inductech”, following a similar example of many of the effects-happy, quasi-industrial predecessors, is selected as the accompaniment for a dance number by Korean choreographer Lee Yuang.

Even after acknowledging the root purpose of this record, it’s also easy to see why these pieces, despite stemming from their support of vastly different forms of art media, were chosen together to constitute its own apt collection. They blend together to overcome the passivity of their original objectives, dispensing some surprisingly pleasant rewards for even an active listener unaware of the installations. The fascinating dichotomy of Ye Viols! doesn’t just exist in the split between passive and active listens, but also extends to its accessibility. There is a strange, endearing welcome in the record’s ambiguous motives that balances out its abstract characteristics common to conventional sound art.

Bearing in mind the specificity of Ye Viols!, St. Werner gracefully instils a level of accessibility as a by-product of its schematic passivity. It’s by no means a record out to break ground, but it’s admirable for how well its pushes its restrictive boundaries while remaining faithful to both its intentions and the artist’s repertoire.