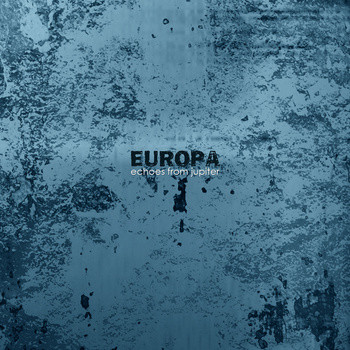 Europa is one of Jupiter’s 63 moons. So is Io. They’re also the names of the debut full-length and EP, respectively, from Quebec City five-piece Echoes From Jupiter. On the exterior, Europa manages to meet all the hallmarks of a post-rock record: profound thematic titles, an erratic track structure teeming with sub-minute fillers, and cold, minimalistic artwork. Now, I know what you’re thinking: they, like many before them, have reached out into the cosmos for a conceptual analogy satisfying the preconceived notion of their work. Unfortunately, like many before them, the literal attempt at conveying the ‘epic’ tag speaks volumes of the veiled attempt at compensating for the void of musical substance.

Echoes From Jupiter cite their influences as Mogwai and Godspeed in the same breath as Sonic Youth, The Smashing Pumpkins and Nirvana. I don’t want to have a go at a band for sharing personal sources of inspiration, but at the same I’ve always subscribed to the idea that name-dropping influences as stylistic signposting is very rarely a good idea. It inadvertently suggests that one‘s art somehow can’t stand on its own two feet without first arming the audience with a compass and a map. More often, it’s a tool for misdirection under the veil of listener guidance. The audible evidence on Europa suggests that Echoes From Jupiter’s supposed attempt at ambitiously meld the ambient, ethereal, cathartic school of post-rock with the angsty dissonance of 90s alternative rock is as confused as it is nonexistent. Misconfigured expectations translate to bemusement when instead of inhaling a scent of grunge-cum-post-rock, we’re confronted with a hard-hitting climax-driven schizophrenic foetor caught somewhere between post-rock and post-metal.

The main issue with this record is that it never ever considers to step outside of its comfort zone, persisting with the stringing together of the same vapid melodies, dropped in puddles of pedal effects and then bounced off one another in a sea of scripted dynamic peaks and troughs. “2.65E-5 Parsec To Io”, for example, mooches off and draws out the melodic play and climactic structure set up on “A Symbiotic Arrangement”. Like other undercooked pieces on Europa, “Bactria Regio Storm” playing off a dull looped melody and a scheduled glittery epically-strummed wall-to-wall noise orgy that add nothing new and progressively dwindle to tedium. The Quebecers make a Herculean effort in instil homage to grunge anthems, veering closest on “Immersed Devices School” with its haunting back harmony or “ART Atomizer” with its echoing vocals and piercing chords, but the distortion-obsessed fret abuse still drifts it well back to the realm of sludgy instrumental.

Despite the bulk of Europa never really rising above the label of ordinary, there are brief encounters that prove it isn’t entirely a lacklustre affair. “Exosphere Panic” manages to justify its dynamic shifts with well-timed and responsive tempo shifts that aid the sustenance of its ear-bleeding climax, even one that is pointlessly brutal and abrasive. The meaty nine-minute closing title track is the record ‘s closest bid at redemption, with more thought put into the structure and ascendency and consequently more semblance of a proper verse-to-bridge chorus evolution. Though it’s obvious why this piece claims the epic finale, it is still plagued with issues of flat execution and heard-it-before melodies and hope for the listener to even bother reaching this point is slim.

Echoes From Jupiter seem very young. By that, I don’t mean age-wise—I have no idea how old these gents are, nor does it matter—no, I mean the way that each piece is formed and delivered suggests an excitable immaturity concerned primarily with quickly materialising a tangible product. It’s about being readily recognisable for the gimmickry of galactic references and a profound, fragmented tracklisting. Europa is padded with a handful of disruptive, irritating noise-ridden half-minute ditties which serve no function but to perpetuate another hackneyed gimmick. While the track structure feels lifted from a manual, the  track execution is overbearing on compositional forms that are oversimplified, and the end result is nothing more than reheated leftovers from yesterday’s post-rock. Like a predictable film or novel, it’s really disenchanting for a listener to feel they’re constantly two steps ahead of a record. Everything on Europa feels trite and routine, every melody, bridge, transition, build-up, and climax, every facet of the archetypal post-rock composition anticipated from a mile away but each time met with a scant dosage that fails to impress. Hints of potential still linger, and with time to develop things may change.