Fhenomina
Found a New Store Just Around the Corner 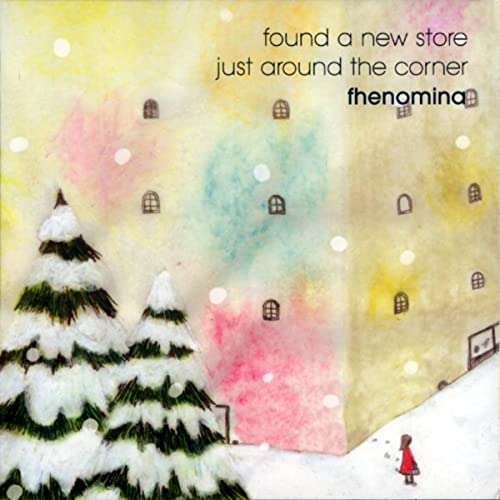 In light of my reputation as a staunch anti-Japanese reviewer within our little community (which if I may say in my defence is purely incidental as I am partial to many Japanese artists), I have tried very hard to rectify this by finally being given that choice assignment that proves I hold no ill will towards the Japanese post-rock community. So naturally, upon discovering that the subject of my next assignment was native to Tokyo, I did want quite badly to finally have my unorthodox streak of prejudice finally end here. But, as you can probably see from the score, Fhenomina’s Found a New Store Just Around the Corner is unfortunately not the one.

Five-piece Fhenomina are out to tackle the elusive compositional forms of elementary shoegazing and glitch-pop, but they seem to be caught in a wide array of indecision. A blunt capsule assessment would simply be “forgettable,” with a generic pool of excessive schmaltz-oriented melodies caught amidst the coarse trademark of glitched overtones. The fusion of vocal harmony and electronic palpitation exhibits a violent dissonance, with the two constantly at odds in adjusting the emotional dial. What I mean more specifically is that Fuyu’s voice, although it is nice, is a little bit too nice, and what this does is it demotes the pieces to little more than suitable accompaniment at a wedding reception.

The album also comes packed with its own anomalies that perform little justice for the album. Near vocal-free “Acorns to See” is a strange removal of the album to more intense ambient territory, at a lengthy seven minutes, and a strong piece by virtue of its complete disassociation with the other pieces. “Not 1 But 2” decidedly eliminates the electronic component entirely, utilising the unplugged glory of piano and acoustic guitar. On top of this, the unpleasant blending of the English and Japanese languages hardly avail the band’s attempts to be versatile, instead contributing to the confused and inconsistent layering.

It’s quite disappointing how a band manages to derive such a bland end product when cited as influences are the likes of Tortoise, Jan Jelinek, Fennesz, Gastr del Sol, amongst many other cutting edge experimental projects. Though it’s probably not right to stereotype records of oriental origin, I’ll self-appoint my own oriental descent as licence to accuse Fhenomina of drawing greater inspiration from the highly tappable resource of anime soundtracks than their arbitrarily listed influences. Found a New Store Around the Corner seems to be stuck somewhere between an uninspiring vehicle for showcasing the humble vocals of Fuyu to a challenging rendition of a progressive era’s brand of elevator music.