Clione-Index
One Thing Leads to Another 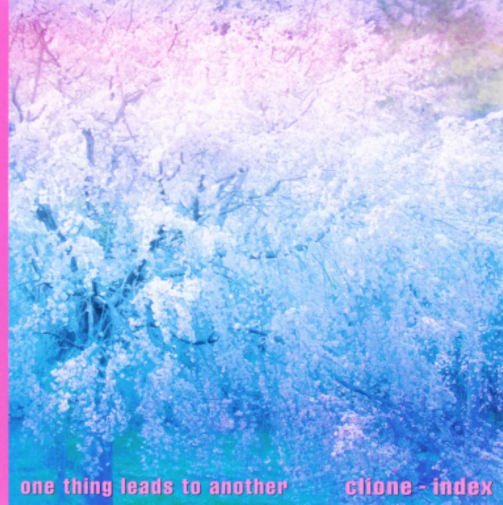 A few weeks after reviewing Ovum’s EPs, I come across Clione-Index, another Japanese band having a go at guitar-driven post-rock. This review is going seem like somewhat of a reiteration of the Ovum review, but it’s hardly my fault as Clione-Index’s debut effort, One Thing Leads to Another, sounds somewhat like a bit of a reiteration of the Ovum EP itself. When I first listened to Clione-Index’s EP, it struck me to be so similar to Ovum that I was wondering perhaps if this happened to be a side-project of one of the Ovum band members; alas, Ovum are from Tokyo, and Clione-Index are natives to Osaka. To be fair, neither band has really been around for longer than the other, from what I can make of their myspace profiles (the Japanese biography on the Clione-Index site, and the general scarceness of English language information on the band existing on the internet, makes it pretty hard for me draw any real conclusions). The emphasis I put on the similarities between these two bands is not due to some kind of remarkable bizarre coincidence; it’s more to do with the fact that both bands seem to retreat to sounds that are safe, generic and sterile.

Never has the tattered expression “all their songs sound the same” been so relevant, and succinct, in describing the problem with a record. The main weak points are the monotonous, unnecessarily drawn-out openings to the pieces, followed by quiet and loud bits that are almost indistinguishable when the slightest bit of attention is diverted. The quiet and loud bits are also queued like a Michael Bay film at its most predictable. The first three pieces on this EP – “Dove Eyes”, “Under the Moonlight”, “Time Goes By” (titles that seem to have almost deliberate allusions to various pop songs, and that show with Judi Dench) – aren’t worthy of an impromptu instrument tuning session by who they’re trying to emulate, Explosions in the Sky.

The music that Clione-Index is aiming for is a slow, droning, melancholic ambient kind, but it falls short of anything even remotely noteworthy. The pieces are dull and unmemorable, the melodies are lifeless and uninteresting, and the overall vibe of the record feels formulaic and uninspired. I don’t think Clione-Index set out to change the post-rock world, but if they at least planned on making their presence felt, these pieces were the wrong way to go about it. It’s like, not only are they obscuring themselves into the crowd, but any shred of uniqueness is like Kryptonite, and the only way to remedy it is to be as bland as possible.

Clione-Index are a band that’s unfortunately trapped under the impression that they can perpetuate the Mono-Explosions novelty, without realising how thin it’s been worn. Unlike fellow native musicians like World’s End Girlfriend, te’, even Cornelius, there’s no sense of pushing the envelope, no experimentation or thinking outside the square. Everything seems to be generated within the safety zone of epic guitar strums, melodic drones and the anticipated midway climaxes. This is one record I doubt many will miss when it goes away.