Empire! Empire! (I Was a Lonely Estate)
When the Sea Became a Giant 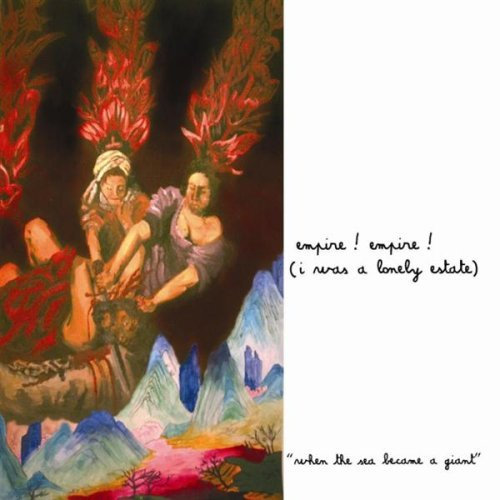 A quite update and preface: I actually quite like this record now, and I was completely ignorant of the emo genre it identified with back when I wrote this review, so I'm retracting the whole thing.

When song titles have a subtitle that’s parenthesised, it’s fairly wankerish. When a band name has a subtitle that’s parenthesised, well, that just utters “wankers” in volumes. Especially when it extends the length of the band name by more than a hundred per cent and results in having to create a separate profile with a shorter URL for redirection’s sake, it’s wanker. It is fairly superficial to be judging a band by its name, but first impressions count for something, and if “wanker” can never be a good first impression. Or perhaps I’m just stalling.

The fundamental problem with this EP is the vocals. Sometimes, vocals can be a saving grace, depending on the ability, aptness and composition of the vocals. I’m not dismissing vocals as a non-necessity like most people commonly accuse post-rock enthusiasts for being guilty of. The problem with this record is not the presence of vocals, but the actual vocals themselves; they’re fucking horrible, which may very well occur in any genre of music.

The album opens as something that could pass for a solid clean instrumental band, but once the vocals begin, continue and eventually take over, it transforms into its typical post-rock-with-vocal counterpart; that is, indie rock. If I look at the vocal inclusion critically based on those three criteria I mention earlier, it fails in all. There is no ability, the vocalist can’t sing, or at least is trying very hard to make it appear so. The notes sung are completely and blatantly out of tune; I don’t know if it’s become the new fad but I still do appreciate the concept of harmony. And finally, they are simply not needed.

Without the vocals, the instrumental portions could very well have been passable, varying from clean, jangly instrumental to softly-uttered, Jurado-esque indie. The opening two tracks demonstrate fairly strong instrumental stanzas which could’ve very well worked soundly as their own thing, but the unfortunate unwelcome presence of ghastly tone-deaf singing ensures that we won’t ever know.

What is wrong with the vocals exactly? I suppose to describe these vocals I could use more positive words like “soft”, “child-like” or “innocent”, but “wimpy” seems somewhat more appropriate, despite its negative connotations. In a way, its negative connotations are part of it is so appropriate. I think when the EP softens up by about the third track which is when things go awry. “Billy, I Have Something to Tell You” is the track where the vocals pretty much derail the whole album. Music that could’ve been passable is so viciously marred by singing dreadful enough to offend the tone-deaf.

I don’t want to get on a pedestal and make any kind of proclamations of instrumental elitism, something followers of post-rock are inevitably confronted at one time or another. As a post-rock record, despite its lingering allusions in the instrumental passages, it does not work. To be fair though, it is more indie rock-inclined, and the vocals I suppose were intentionally meant to be at the forefront as opposed to simply being “another instrument” and I guess as indie rock, it somewhat broadens the musical methodology. But even as an indie rock record, this freshman effort is still miles away from something memorable.