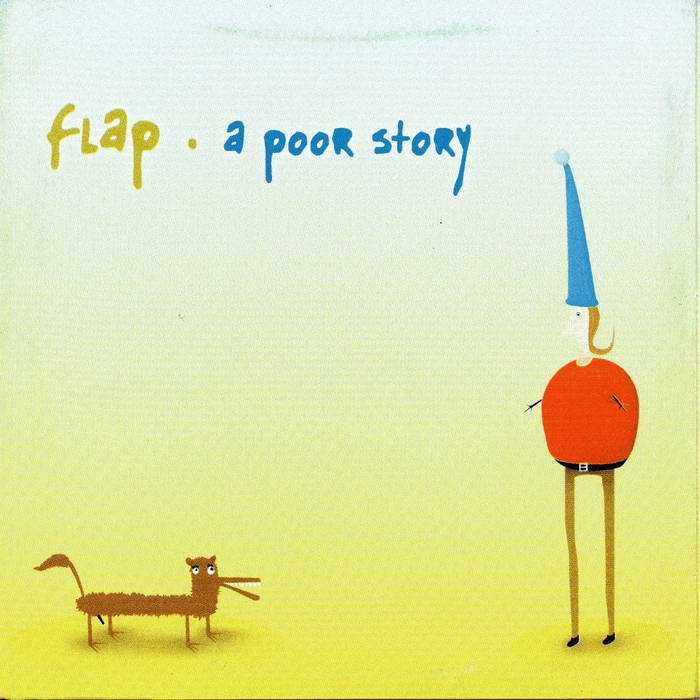 With a strong presence in the global instrumental scene, Italy has proven that it is more than just pasta and a mean-arse national football team. Hailing from the town of Montagnana located in the Boot’s north, Flap add their name to this ever-growing list, with a sound dabbling heavily in the guitars-for-clean-melodies school that lies somewhere between Philadelphia’s Saxon Shore and fellow natives Neil on Impression. Though they are perhaps less emphatic on the innovation component than latter said band, there is a bit more focus on clean melodies than the stomp box.

A glimpse of Flap’s album cover seems to reflect the band’s odd predicament. The preschool cartoon of a thin beardless gnome and his dog somehow has little congruence with the nature of the music put forth on this record; guitar-driven melodies inundating a work that is dedicated to the pursuit of the epitome of the post-rock sound. It’s a shame Flap don’t properly manage the consistency in their structure and progression, rather always stalling with safe melodies before dishing out something impressive. Some of the mid-song transitions are abrupt and a tad irking, even when the discordance still manages to forward itself to solid, coherent phrases—“Liberty” being a prime example of this.

The melodies are hold firm ground on initial spins of the record, at times engaging and interesting. Much like the album art, which beside the fact that it portrays a child-like subject matter in no way a strong predictor of the contents of the album, could still stand to represent a sense of mischief and adventure, with exotic, colourful melodies especially evident in tracks such as “Mexico” and “Speechiodaequa”. The album is steady and paced, good-natured and humble, sparse in its employment of the sonic space feeding us its layers of melody in agreeable morsels. “///0\\\” is an unpronounceable track which I will proceed to call “girl” due its ASCII resemblance to exactly that, appropriate employs an acoustic guitar to deliver its rather predictable amorous themes. The closer, “Mai Visto!!!”, tips itself a little towards the minor, less optimistic and dark, and wouldn’t be out of place on And Then I Strapped Explosives to my Body  from the now defunct Dutch crew, Soliare. I almost found that album to have a rather striking overall resemblance to this (I figured it might just be a European thing).

Flap are a band who seem to have their mentalities equipped to be set outside the square, so it’s a shame they don’t set out to execute it in the same manner with which they assert it. No less, the album reveals a little extra something about itself following subsequent spins, provide a pleasant surprise at each turn. It’s a pity, in that it doesn’t have the overall capacity to arrest enough attention to allow its little nooks to reveal themselves. The melodies are largely guitar-driven, and generally remain quite clean, with occasions for those little queued post-rock moments where the stomp box is called for and the strumming becomes a little more rapid and intense. Those moments on A Poor Story plays out to be fairly safe and somewhat detract from the success of their less distorted counterparts.  Kudos to Flap for their effort in keeping their thoughts open, even if their song-writing ability has yet to catch up.