Joy Wants Eternity
You Who Pretend to Sleep 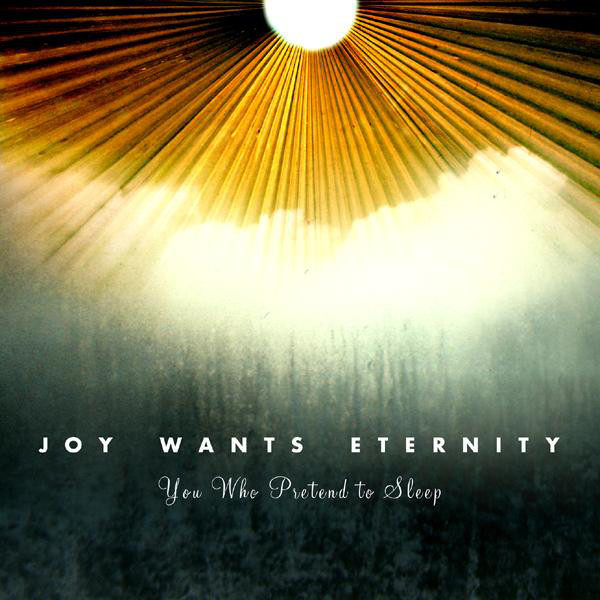 Powerful music renders imagery. Hidden beneath the dexterity of instrumental music sits emotion; somewhere within emotion sit symbols, and amongst this diverse ocean of thought, there are symbols which clash. There are some things in post-rock we can’t deny having mentally visualised at least once: lights illuminating darkness, night skies glittered with stars, and horizons; a conceptually infinite phenomenon, infinite because we know the end of our peripheral is only due to the curvature of the Earth, and what lies beyond is literally endless.

Eternity is akin to infinity. The name Joy Wants Eternity stands boldly as an in-your-face post-rock moniker. Eternity is one thing the genre seems to strive for in its continuously lengthening compositions and vast expansions in spaces of relative finitude. Must You Smash Your Ears… proved that they could take the emotional dynamics of post-rock we knew existed, and amplify them broodingly and thoughtfully. Their debut album, You Who Pretend to Sleep, has on display an ability to create staggeringly beautiful epic imagery, but their epic strive isn’t for vast landscapes like fjords and valleys and so forth, but rather the nocturnalism of city lights and moonlit skies.

“Existences Rust” ushers in an opening so loud and visceral, promising something special, something live, breathing and utter in presence. Drawing focus away from sadness and melancholia and emphasising hope and, well, joy, You Who Pretend drowns itself in reverb and disperses it melody and raw cathartic releases, epitomised by pieces like “Above the Clouds” and “From Embrace to Embrace” and “You are the Vertical”. After a litter of short, droning gems, there’s “Uriel”, arguably the highlight of the album—from its frail, reverb-filled opening and its emotive layering of a spectrum of textures; violins, orchestral bells, and especially closing on acoustic guitar, all held together by an intense, haunting melodic guitar element.

The fairly modest transition between Must You Smash and this album was initially something that appeared before me as a shortcoming. The transformation we witnessed with Caspian when they delivered The Four Trees raised the bar for debut LPs; the full and intense experience of this album rendered You Are the Conductor a tame and distant preview. Itexhibited an evolution, a dynamic transformation that nurtured a maturity. Joy Wants Eternity milk every bit of their emotional arsenal—clusters of quiet-loud transits dispersed in reverb, epic strumming and melodic guitar-driven passages—but it all stays well within the boundaries established on Must You Smash. There’s no drastic reconstruction; even the length is hardly extended, clocking in at less than 40 minutes and a mere four longer than the EP. Venturing outside the boundaries and expanding their repertoire never seems to be a priority, as if by choice. Compared to the transformation Caspian made between their debut EP to their debut album, You Who Pretend pales in comparison.

That said, it is not a criticism per se, as hard as it is to believe. Joy Wants Eternity have flourished in their own right as a bold and technically sophisticated group, almost enough to mask the inevitable fate of being, at times, a near dead ringer for they-who-shall-not-be-named (hint: Texas). Even short and sweet gems like “Yet Onward We Marched” felt to be about the retention of hope in darkness and glowing visions of stadium lights, and together with a deceivingly alluding title, could’ve been subservient in anchoring the imagery of Friday Night Lights. You Who Pretend is a complementary effort to this, and to itself. Joy Wants Eternity’s bind between EP and LP is not a destructive one. The strength of Must You Smash, and indeed the saga-like open-endedness of its EP format, left room for a release like this. The quality of thought in composition vindicates itself as something that has to exist, not merely a substitute reiteration. You Who Pretend to Sleep will resonate.