Mono
Hymn to the Immortal Wind 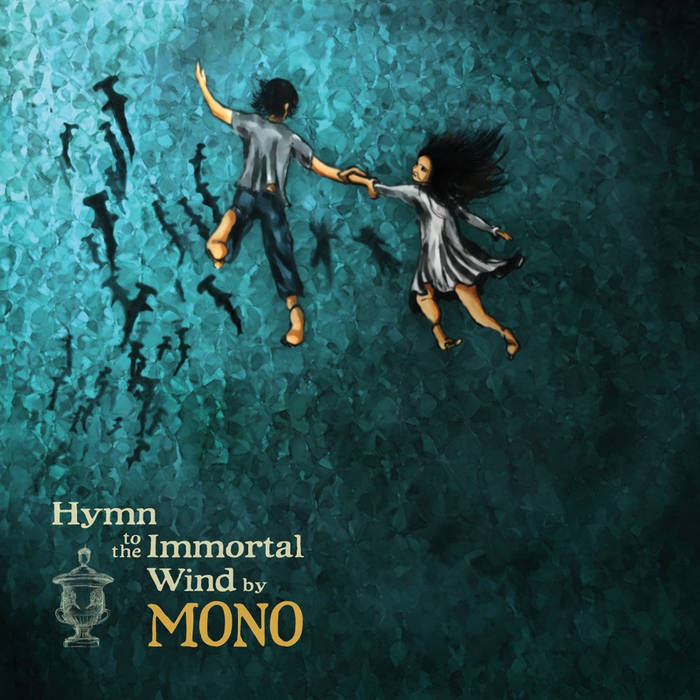 In our critique of music, us human beings with our natural predispositions and biases attached, will be inclined to take into account more things than, ideally, the single album at hand based on a list of fixed, standardised criteria. If only life was that easy. When does an artist need to be tried against their own standards, and when are pulled out of their own context and stacked up against their peers? The truth is: there is no answer, just greyness. The giants of post-rock, notably Mogwai, Sigur Rós, and Explosions in the Sky, who I’ve noticed that with all of them the consensus that been all their latest releases (as of 2008) have seen their deified status taken a notch down. While none were panned per se, for various reasons they certainly weren’t elevated to the opuses that carried them to this level. The reasons for this were generally one of two: either they had overworked a new direction, or had subdued an old one—either way it resulted in a divide amongst fans and cemented a barricade to any potential classic status.

And now in steps Mono, for their ‘turn’, if you will, to either fulfil or contravene this pattern. Before I begin, I should get out of the way a few points. Mono were one of the big post-rock bands that never really got me for reasons that I will outline later. That is not to prove or justify a particular shortcoming on the band’s part, but rather an ill preconceived notion about them that has usually been the cause for why they are so prone to being overlooked. A weak analogy with Chicago giants, Tortoise, could see a similar scenario but with the crowds reversed; while Tortoise is often overlooked by the recent generation of listeners much to the chagrin of devoted 90s followers, Mono are often cast aside by the 90s crowd, although maybe not to a same extent, due to a feeling that their guitar-drums-bass and quiet-loud structure is derivative in an area where there is already too much. I will readily admit that I was part of the latter.

Hymn to the Immortal Wind is the Tokyo quartet’s fifth longplayer. Though I would vehemently disagree, the foreseeable accusations of Mono lacking progression on this, and on previous records, are understandable. Skim the surface of these pieces and essentially, you will find that they don’t tend to work without a template—no argument there. But there’s another level to it; a level of subtle, visceral, meticulous complexity often missed by virtue of the melodic fluency that nurtures passivity rather than penetration. It’s what makes their sound so distinctive and identifiably them. Enter the flood of epic post-rock simulacra that transformed the genre into a near-perfectly competitive market, and naturally some of the credit is lost, but it should not obscure the foundation that, in all its right, was once one of genuine aptitude and wonderment. Credit is still due.

On display, we are witnessing the dispensing of maturity. It’s hard not to be immediately sold by the opening one-two punch of “Ashes In the Snow” and “Buried at Sea”. From the music-box glockenspiel melody, a delicacy scarcely seen in previous work, that gently ushers in this romantic tale seamlessly builds to such a beautiful, hopeful reverb-soaked climax that, rather than say we predicted or expected, was something we anticipated with a sense of yearning and excitement. As the eleven minutes of “Ashes” rushes past, the formula renews for “Buried” as another chapter unfolds. Unlike “Ashes”, “Buried” is made in two halves in a tension/release make-up that ends in such glorious, cathartic fashion and illustrates just how easily and effortlessly it comes to this quartet. It would be superfluous, and rather dull, for me to go and describe the structure and progression of every piece, and it would certainly detract from the true impact of this record on a listener. Suffice to say though, each climax conveys a different feeling: despair, redemption, triumph, hope, or however the imagination chooses to perceive it.

Although Mono are regarded, alongside few peers, as post-rock settlers, forefathers to a series of unwritten parameters that has spawned and guided a plethora of followers, their own growth as a collective has been equally inspiring. Hymn is the culmination of a near decade’s worth of material, evolving in the model constructive sense, refining every subsequent release to improve upon the predecessor. Mono prove that it is possible to keep an established formula—the basis of their sound and overall artistic credentials—and still hone it in a new direction. Along with their core twin-guitar-bass-drums formation, they have ambitiously taken on a near orchestra of strings that resist turning into a self-indulgent symphonic orgy (as easy as it could’ve been). Instead, they opt to deploy the auxiliaries in an economical sense, telling the story to the extent it needs to be told and exercising restraint with what they have. The only pieces that do feature strings prominently, “Silent Flight, Sleeping Dawn” and “Follow the Map”, depart from the formula and, perhaps not coincidentally, are the only ones that run substantially under ten minutes. Both are string heavy and cinematically romanticised, serving as interludes or bridges in between the chapters. The result is a product both homely and fresh.

Another admirable inclusion is the distinctly oriental flavour of a lot of the melodies. Whereas in the early days on releases like Pipal Tree, One Step More and Walking Cloud were very much the bitter, hard-hitting and bleaker thematics of Westernised style, Hymn, by an enormous extension of what was far more subtly introduced on You Are There, have assigned this record a cultural identity (and what identity more apt than Mono’s own). Originally conceived as a concept album sketchily described in the press release as based around an “epic love story”, there’s a sense that Mono are withdrawing from the darker apocalyptic themes that dominate Western epic post-rock. And yet still with their tension/build-up/release format, their glittery strumming, resonant crash cymbals, and reverb-soaked climaxes, the romance theme goes far to accentuate a rare Eastern flavour that is rich, cohesive and validating.

The ironic thing about this is that Mono have broken the damning pattern of their esteemed peers by adhering to a formula. I’m certainly not sending out a message that encourages formulaicism, because even in the case of Mono it is really only one part of the equation. They adhere to basic principals in composition that they know work, not just for aesthetics but for the satisfaction of their own technical signature. And to say their preference to remain faithful to their formula doesn’t imply that they haven’t progressed—on the contrary, the evolution of their instrumentation, the album’s harmonic and melodic unity and the basic essence of an ambitious, polished, mature, cohesive whole as an outcome of a prolific career are just some of the examples of why the formula here is mere footnote. Developed and authentic, effortless and economical, simple and beautifully timed, layered majestically and restoring the legitimacy of a tattered genre—when the Mono era ends, Hymn to the Immortal Wind will be a lynchpin in their legacy.