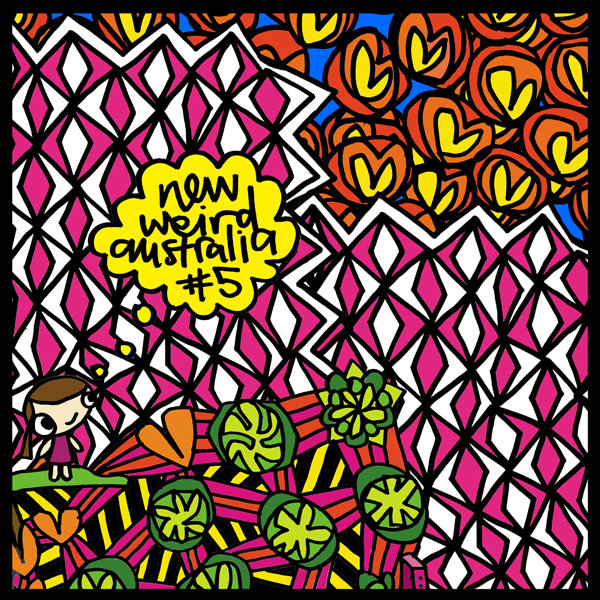 The New Weird Australia, a bi-monthly compilation voicing and honouring the hidden segments amongst Australian experimental musicians and sound artists, has had its share of taste tests here at The Silent Ballet. Sydney-sider Marcus Whale covered the first volume, and Calvin Young had a crack at the next, before batting it right back to another representative Down Under, namely yours truly. Very much carrying on from the legacy from the thus far four instalments, Volume Five continues mining further into Australia’s fruitful underground scene for more undiscovered and unacknowledged experimental stock. And what is fascinating is seeing how such niche targeting in style coverage manages to yield an incredibly diverse and simultaneously coherent

The opening three pieces aptly set up the story of Volume 5. Starting with “Hex River Valley”, a prologue of sorts from Melbourne’s Mookoid, the understated melodic opening and backward voice distortion track get a mighty contrast with the video game effects of the ensuing “You Knight”, Dot.AY constituting a flurry of computer-generated MIDI-like tones squeezed out from Nintendo consoles.

Throw in Melbourne’s Peace Out! and their a psychedelic, Middle Eastern-flavoured “Running on Sand” and the eclecticism of what’s to come on compilation and by extension, the preceding New Weird Australia series.

Electronic experimental music still dominates the compilation, running the gamut from minimal processed textural sound art to laptop-aided glitch generators. ///▲▲▲\\\, pronounced ‘void’ (yeah, just take my word for it), bears not only a curious name but a MySpace layout that is amusing and disturbing, contributes “Spit Shine”, a grainy, gloomy bit of funk-oriented psychedelic, beats-driven ditty. Sydney palm tree enthusiast Kate Carr delivers “Textopera”, a Basinski-esque ambient loop piece exercising eerie minimalistic restraint, as does Sydney’s Gail Priest in her use the seesawing choir-like tonality on “Etchings”. The compilation gains a bit of dance momentum on Vorad Fils’ “Temple Leak”, a pseudo-melodic glitch-fest, before retiring any semblence of dancability on Justice Yeldham’s “March of the Bodypumpers” is a thoroughly anarchic orgy of noise and aural abrasion. Even Red Plum & Snow’s poignant shoegaze-slowcore acoustic number “I Would Die 4 U” cannot escape the electronic gravitational pull of its surroundings, working on a wistful interplay between male/female vocals that feed off one another in reverberation.

The comp also isn’t with its slightly more accessible moments. “Mockery”, a doomy quasi-grunge drone rock n’ roll piece from duo Simone and Laura, a.k.a. Burning Palms, represents the Australian corner of feministic riot grrrl acts (Beaches, Batrider). Melbourne four-piece Caught Ship “BlackHoleSlashSweatBeat” is an electronic-ambient number that, besides its unintelligible drowned-out vocal track, ventures dangerously close to the much maligned post-rock label, probably a bit closer than the rest of the compilation would suggest. Crab Smasher “Skin Destruction”, whose sweet melodies, lo-fi instrumental structures and synth effects give off the impression that if perhaps layered the charm of some twee vocals could easily propagate it into being mistaken for realm indie pop stardom. Finally, the penultimate Ripples’ “False Mission” showcases some delectable tribal-esque percussion to complement minimal intermittent rhythms, and then Blake Freele sees out the Volume Five with another dark electronic number, “Inside There’s Expectations”, littered with piercing screeches and untimed floods of static that capture the essence of New Weird Australia’s musical philosophy.

What is the purpose of a compilation—to sample the offerings of an individual artist, or to attempt to create a cohesive work from a collage of ostensibly unrelated works from separate artists? It perpetuates and tightens a theme with a reasonable level of consistency, and while still offering variety and living up to its website by-line of “Eclectic & experimental Australian Music”. Also, despite listening intently for hints of any distinct Australianisms in the music, the styles left little room for cultural disambiguation. It is a border-transcending kind of experimentation that New Weird Australia supports and offers exposure, but, like most things, the geographical disposition of these artists (concentrated mainly in the Southeast) seems more like an incidental unifier than a defining one. This was never meant to be a series to created to change the world, but rather simply to give voice to highly niche, fringe subculture. And the reason for obscurity for many of these artists is largely explained. But I don’t say that in a pejorative way, because a lot of this art is deliberately so—and when classed New Weird Australia.