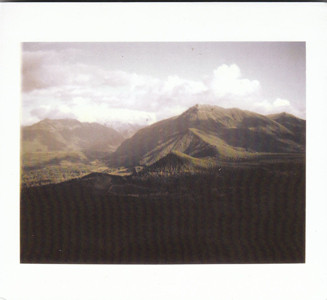 Upon inspecting the website of Post Harbor, I couldn’t help but wonder if post-rock culture—not necessarily music or content—might quickly be approaching what the point of satire. Without levelling my observation specifically at this Seattle five-piece, the names, titles, artwork and packaging all seem to signify a kind of stylistic trend, separate from the music. It ventures dangerously close to something akin to a reproducible kind of chic not unlike the fashion statements one expects to accompany this genre. With its plain white frame on the album cover, minimal textual layouts, stock images of natural scenery and an album title like They Can’t Hurt You If You Don’t Believe In Them, it’s no wonder that someone who’d yet to hear a single note was able to speculate the inherent sound to alarming accuracy.

This is not to suggest that I’m some sort of clairvoyant, or even that this apparent predictability is even a detriment—it simply indicates that post-rock as a genre has reached a point in its life cycle where even a remotely seasoned listener will be able to pick up on its aesthetic signals. And as They Can’t Hurt You promptly kicks off with the impassioned, violent growling of guitars on “Ponaturi”, all these signals are instantaneously validated. In a nutshell, Post Harbor’s brand of post-rock fits tidily into the category of the venting, quiet-loud guitar-driven delivery of Caspian or If These Trees Could Talk. The motifs alternate between gliding melodic interplay and fiery reverb-ravished string abuse, profoundly reinforcing the record’s tangible exterior and cosmetic counterpart.

Though a guitar-bass-drums core is evident, Post Harbor‘s auxiliary instrumentation is an interesting point. Despite the ambitious outfit employing a healthy variety of additional textures and timbres, such as the Roland keyboard-like tonal melodies on “Cities of the Interior” and “With a Line Graph I Can Tell the Future”, or the heavy cello pervading “Shirakashi” and “Alia’s Fane”, they still manage to execute a precise sound not all that far removed from a more conservative guitar-bass-drums groups like I Hear Sirens or If These Trees Could Talk. The dominating modus operandi of quiet-loud post-rock dynamism doesn’t make obvious the aesthetic utility of these new sounds, and yet it’s there and serving adequately as grist to the Post Harbor mill.

The vocals are a bit of a mixed blessing on this record. With a proper mix of precedent bands that began in pure instrumental and then flirted with an often damning vocal component, conventional vocal aesthetics still appear pretty far from being an addition that instrumental enthusiasts immediately welcome upon hearing. No doubt on They Can’t Hurt You there was certainly a bit of that initial disruption, the irking feeling attached to the unanticipated interjection of vocals, occurring most evidently on “Cities of the Interior”. Somehow, though, it manages to develop into an endearing reference to a style somewhere between indie rock and pre-commercialised emo. In fact, “Caves, Hollow Trees and Other Dwellings” introduces itself like a tribute to the 90s emo renaissance, circa Cap’n Jazz, Texas is the Reason or The Promise Ring, before slowly drifting back towards its catharsis-driven post-rock equilibrium.

They Can’t Hurt You is tidy and admirable for an early effort. The only drawback that I would say stops it from approaching a greater notability is a troubling lack of flow that plagues the record’s cohesion. The fragments and passages themselves are composed and executed adeptly, but come in inconsistent spurts strung together with no real structural integrity. That is, its various augmenting sounds—the vocals, strings, keys, amongst others—are weaved in and out of a post-rock bulge with a lacking sense of cohesion or directionality. Nevertheless, fans of Caspian, If These Trees Could Talk, I Hear Sirens, Constants and bands of that ilk should be able to embrace this effort of a relatively young crew from the Pacific Northwest, if not as a particularly transformational record then at least as a cruisey, satisfying Friday night listen.