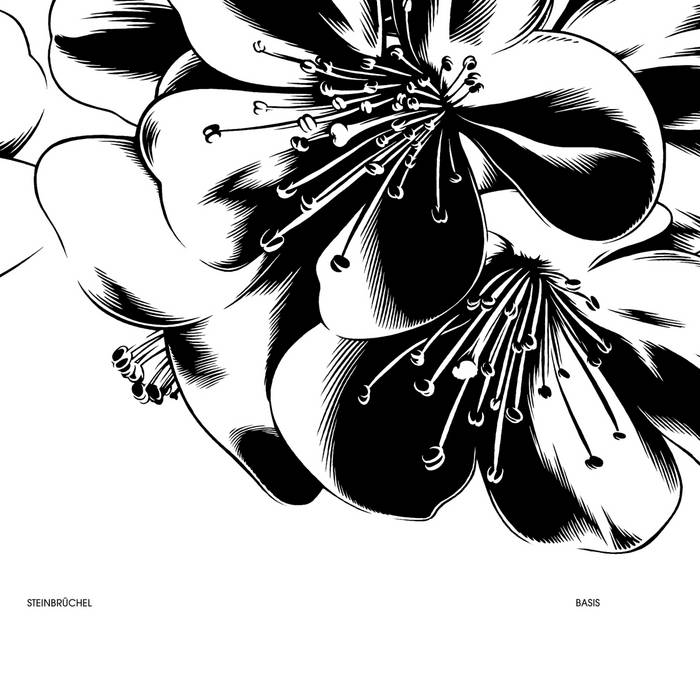 Ralph Steinbrüchel is one of those people hellbent on obscuring the boundary between ‘musician’ and ‘sound artist’. Tiny Braille-like dots and dashes, acting like music box pins, taking up the tiniest fraction of a completely white surface acts as the official Steinbrüchel website, a clear indication of the literal nature with which this musician has taken the term ‘minimalism’. Upon witnessing him support the formidable Tim Hecker on their Australian tour—an inevitable destination seeing as both Steinbrüchel and Hecker have close connections to Lawrence English’s Brisbane-based Room40 label—I learnt that even ambient instrumentation lives up to notion of ‘minimalism’, consisting of nothing more than a Apple notebook and a control pad with several knobs.

Basis, a studio recording from said label,is an album comprised of three reworkings based on recordings by other sound artists. Each reworking is divided into smaller parts interspersed amongst one another, creating a delicately woven pattern of pieces that flow into each other. The first series of pieces, “Interlude”, are based on guitar recordings by Australian artist Lawrence English from his 2004 record, Happiness Will Befall. The 20 minute sum which the four parts add up to is an experiment where Steinbrüchel translates the original melodies into a series of tones, underscored by eerie bits of atmospheric feedback. Part 1 sees the clearest retention of a melody; the sinusoidal movement of the background tones almost completely gapless and living up to the word “ambient” in every sense. This relentless tonal score is one that could perhaps accompany or conjure footage of one travelling down a metropolitan street in a vehicle, glaring through intoxicated eyes at blurry, bleeding city lights. The second part of “Interlude” sheds the melodic element and emphasise subtle distortion, knobs twisting gently to create a more mechanical harmony, but as it progresses to the last two parts, the enveloping sounds are again coloured by melodies subtle and somewhat adrift.

The next series of pieces, “These”, reworks the guitar recordings from Ben Frost’s 2006 effort, Theory of Machines. The first part sees a prolonged ambient tone, emerging out of the crackles of radio static, to be dubbed by the looping of a subtle muffled bass line. There are nuances in its 17 minute existence, but none that allow the listener to escape the mental paralysis severely affecting their ability to maintain attention. If “Interlude” is the accompaniment for a drive down city streets, then the second part of “These”, 8 minutes, is that for travel down endless, brightly-illuminated tunnels. The rise in tone pitch feels as though it can be accounted for by the echo of an enclosed space, such as that of a tunnel. For piece belonging to such a predominantly minimal artist, it is lusciously dressed in layers of melody spanning a variety of octaves, creating a rich texture not unlike drone kings, Labradford.

The final piece, “Falter”, based on piano recordings from a fellow Swiss artist, Bernd Schurer, is a single 20 minute part comprised of dense ambient harmonic tone flowing gently over a quiet, near-unobservable melody. It feels like an emotionless departure from the others while still manages to hold onto an atmospheric motif or two, shoehorning it into its place on the record. When I saw Steinbrüchel live, the set was one continuous, indecipherable piece, and had it been several pieces, the mutual prolonged gradated tone made it impossible to tell. No doubt, the natural seamless flow to this treatment of sound made that inevitable. Somehow, I feel the same way about Basis: even pieces split and woven into one another manage to form a cohesive, seamless whole. Steinbrüchel is one who will one worthy to challenge contemporaries.