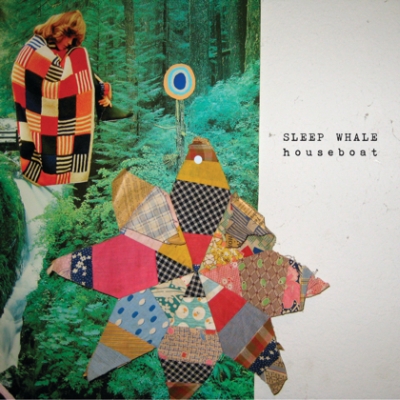 Sleep Whale are making quite a splash at their Western Vinyl residence. The four-piece, already much beloved back home in north Texas, are priming to turn some heads with their debut full-length, Houseboat. With Texas powerhouse John Congleton lending a hand at the mixing board, the band have quickly moved on to follow up their charming debut EP, Little Brite, with a more ambitious, developed and mature sound that strives to take whole advantage of the greater space afforded by a longplayer and accommodate their inherently eclectic style. As soon as Houseboat launches with “Green Echo”, the orchestrally executed combination of instruments, including a cello and a violin with a guitar, bass and percussion, together with the sonic abundance lively psychedelic-folk, illustrates the enormity of the band’s progression in spades.

Sleep Whale discerningly weigh up the necessary input quantities of psychedelic, shoegazing and folk textures to construct Houseboat, which could be just as easily described as a genre-fragmented collage. With as much string input as there is sequencer and tape loop, the amalgam creates a rich, vibrant colour to a sound that is simultaneously uplifting and poignant. The sound of clean acoustic guitar piercing through rougher textures on “Summer Sick” and “Make Another Picture” gives it this type of liveliness, as does the gorgeous, subtle electro-acoustic number “Sleep Reprise” that also provides a handsome instrumental component to the album.

The much pretty “Still Drumming” presents another angle to Sleep Whale’s seamless merger of psychedelic folk and shoegazing to produce wondrous anthems. Houseboat’s closers dress a tinge of melodrama over the stylistic mix, beginning with “Ferry Whistle”, a slightly more restrained pre-finale instrumental interlude that seeps into its acoustic arpeggios some curious incarnations of partnering instrumentation, then to the penultimate “Light Tunnel” which bears clear post-rock structural sensibilities, before storming home on “Giant Wings”, a calm, submersing, anticlimactic drone-driven number that again speaks volumes about the band’s itchy genre-experimenting fingers.

The selective intermittent interjection of the vocals adds to the conspicuous experimental value of the album. “Cotton Curls” introduces droned-out vocals that perpetuate the band’s love for opportunities to incorporate experimentalism in pop-oriented renderings. The psychedelic acoustic melodies and samples of underwater bubble-blowing in “We Were Dripping” are also spiced up with vocals, this time possessing a certain charm not unlike that of a distant, melancholic version of Conor Oberst or the male voices in his fellow Nebraskan pop crew, Tilly and the Wall. The non-traditional compositional structures amongst other things work a long way to demonstrating the malleability of such a raw, energetic and aurally-fascinating approach to sound.

The lovely accompanying album art for Houseboat, of a blanketed levitating child over a patch of forest, with a star made of a variety of handmade quilt patterns superimposed, serves as an apt analogy for the longplayer itself. Decorative and colourful, innocent and frolicsome, eclectic and harmoniously at the seams—Sleep Whale harness a clear fascination with potential instrumental routes that any of their given pieces can pursue. What results is a luscious, exuberant, exotic, pop-sensitive juxtaposition of rhythms and melodies, textures and layers, and other bright, musically-enriched ingredients.