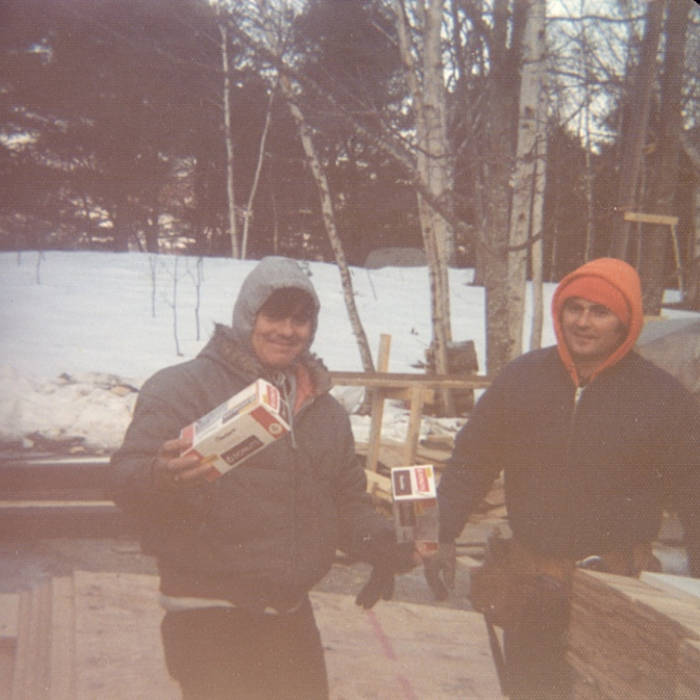 Nanook is a concept album originally recorded by The Sumner McKane Group as a film score to Nanook of the North, a 1922 silent documentary about an Inuk (Inuit) family sin the Canadian arctic.

To accommodate the time constraints of a CD, the record itself is a truncated 55-minute version of the full 80 minute live performance, with a sample of pieces ostensibly covering most of the ground in premiere at a proper cinema-aided rendition of the epic score. Setting aside this detail regarding Nanook’s function, and the soon-to-be discussed musical contents, the artwork and promotional elements of this record have never been more faithful to McKane’s established brand of winter-oriented, nostalgic Americana.

While Nanook does have its moments, the music is a bit of a mixed bag. Nanook opens strongly, leading on from seamlessly from McKane’s incandescent previous effort in What a Great Place to Be and fulfilling McKane’s self-proclaimed ‘ambient Americana’ to a tee. “Looking for Shelter” opens in a dreary-eyed, Hammock-esque fashion, sporting a spacey-drawn out atmosphere, lazy drumming and howling delay. “Making The Window” continues the ethereal ambience with its shoegazing wash over, and lending its weariness to a slow-starting, midtempo number on “The Abandoned Igloo”, another gentle introspective tour of McKane’s homely aesthetic.

The rest of the album, where McKane takes the liberty of dabbling in a variety of different styles, discernibly for the sake of the film score, doesn’t combine nearly as well and leaves the album in a bit of a mess. The first rather abrupt example of McKane’s experimental licence is “Fishing”, a day-on-the-town kind number with its bluesy guitar-work and tight bass groove. “Building The Igloo” is an admittedly rather undesirably catchy, zestful up-tempo track that continues to showcase McKane’s departure from his usual sensibility and reinforce the anomalous status of Nanook in his catalogue. The key melody from “The 20th Maine” from What a Great Place to Be becomes a recurring motif on this album, especially in “Winter” where it is effectively a toned-down cover version. Penultimate “Hunting the Walrus / The Kill / Cutting the Walrus” turns the strangeness dial up a few more notches, serving as to what I imagine is the climax of the film and effectively that of the record.

With or without concessions for its conceptual motive, Nanook is still positively an underwhelming successor to the remarkable magnum-opus-contender of What a Great Place to Be, and by extension, Night Blooming Cereus, Two If By Sea, and especially North—records crafted with exceptional compositional dexterity and versatility that still exhibited a firmly established, delicately articulated stylistic commonality. It’s a tricky balance, especially when the expectation of consistency can be as much of a burden as the demand from listeners for that breath of fresh air resulting from stylistic exploration and experimentation. It’s inevitable that artists as prolific as McKane require reinvention to mature, but maturity is hardly the issue that explains the inconsistency of Nanook. Unlike What a Great Place to Be, which stayed oriented towards its rubric of the poignant homesickness and profound hometown nostalgia, Nanook’s incongruent pieces disallow any adherence to a particular cohesive theme, arguably (and ironically) by virtue of its adherence to the events of Nanook of the North.

At the risk of undermining my own argument, I’ll admit that a minor part of intuition tells me I ought to be praising McKane for his versatility, in working capably with the variety of uncharacteristic styles, and for his artistic ambition, in not only tackling the sticky territory of film score composition but doing it for a kind of film where music is given particular prominence. I’ll concede that an assessment of Nanook as an standalone work isn’t completely fair without acknowledging that it was recorded to serve a purpose beyond its own sake, but I do wonder if Nanook could’ve been as geared towards the content of the silent documentary without having to depart so far from the sound McKane has so lovingly nurtured in his hitherto career.