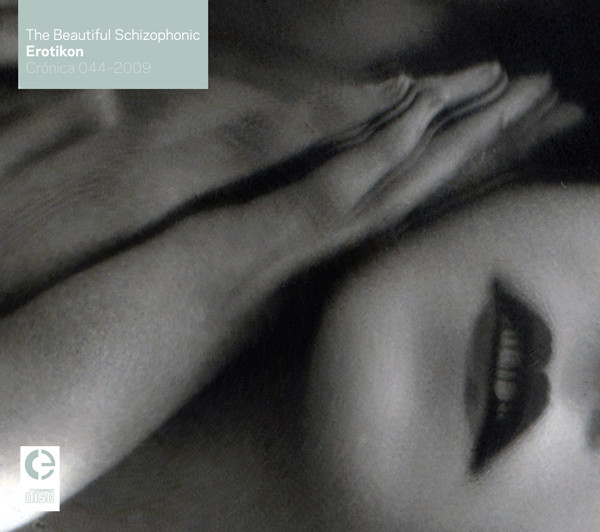 In a wilfully poetic description sanctifying the laptop as a memory device, Jorge Mantas summarises his computer-generated music as “romantic drone music for modern lovers”. Hailing from the historic Portuguese city of Évora and performing under the moniker of The Beautiful Schizophonic, Mantas provides plenty of supporting evidence for his mission statement on Erotikon, an epic 77 minute recording traipsing vast sonic space that covers an ambitious scope of ambient terrain. Emphasising tonality to generate an eerie minimalist cinematic atmosphere Mantas explores his romantic themes in the drone-washed textured tradition of Lawrence English, Tim Hecker and various other members of the 12k/Room40 family.

Though the sparseness of Erotikon prevents it from dominating the aural senses, leaving the listener to assume a relatively passive role throughout, Mantas does little to signpost the stylistic trajectory of the album.  Seven-minute opener “Furla” is a continuous, single-layered elongated tone that is dark and eerie, in the menacing style of Lynch-Badalamenti circa Twin Peaks, but then it switches to the more hopeful, glittery “Aysha”, with quietly comforting Blade Runner-esque futuristic synthetic tones which are carried and expanded into the subsequent “Bambilány”. Though the pieces alone are very poignantly intoxicating, together there is a slight discordance. Apart from the brief interlude “Musgo”, which consists entirely of sounds of singing birds with erratic interjections from a tuning radio, the field recorded elements are used sparingly and to no real avail. “Blumarine” falls into the category of sonically simulated submergence, done in a computerised manner akin to Loscil that invokes what feels like actual sounds of flowing water and eventually dissolves into something that flirts with sound art arrangement without so much vindicating its ambient context. The distorted speakerphonic vocal sample that pervades “Fornarina”, an otherwise another echoing space-filled ambient number, also feel awkwardly placed and without contributing to a cohesive style of Erotikon as a whole.

“Aliénor d’Aquitaine” is a fourteen-minute saga aspiring to grasp the heavens, layering multiple ambient textures that combine to evolve into drone thickened audio companion to any planetarium, even adding a heavily Stars of the Lid influenced pause-restart to its sonic trajectory. “Alba” is arguably the most complete piece on the album, demonstrating more melodically fluctuant activity and including more timbres, such as the clean taps of a piano, and various interacting layers that breathe into it an almost melodramatic disposition. Epic fourteen-minute closer “Pollen” more or less captures a bright, pleasant summation of the puritanical ambient tonality of the album in a, but fails to add much else to the album.

The minimal nature of ambient music tends to force it into a fairly limited range of expression, causing it to be somewhat difficult to consciously comprehend or absorb. But then again, the majority of the time isn’t the point. Mantas’s own description on his Myspace is somewhat bizarre and fascinating, stating that his music is “future nostalgia created to be forgotten until the right time comes”, which somewhat vindicates its supposed intentional passivity. On the other hand, while seeking to keep things minimal, Erotikon falls short of installing some kind of distinctive angle that manages to separate itself from the obvious stranglehold of Mantas’s influences, which don’t seem to coalesce all that well. His knack for picking out sounds is no doubt inspired and compelling, but not on a greater level transforming.

Notwithstanding its lack of exceptionality, Erotikon is a solid record. Perhaps ‘Schizophonic’ (ignoring its approximate spelling) is an aptly chosen pseudonym that reflects the variety of ambient stylings on the album. At times it feels like Mantas is merely divulging an encyclopaedic knowledge of laptop-driven computerised ambient music. There’s little to fault in the sonic command and quality of production, with everything sounding sensibly unadulterated refined and still retaining the charm of a rough, distorted exterior at the right moments. Once Mantas develops his own sound, it is inevitable that something remarkable will come of it.