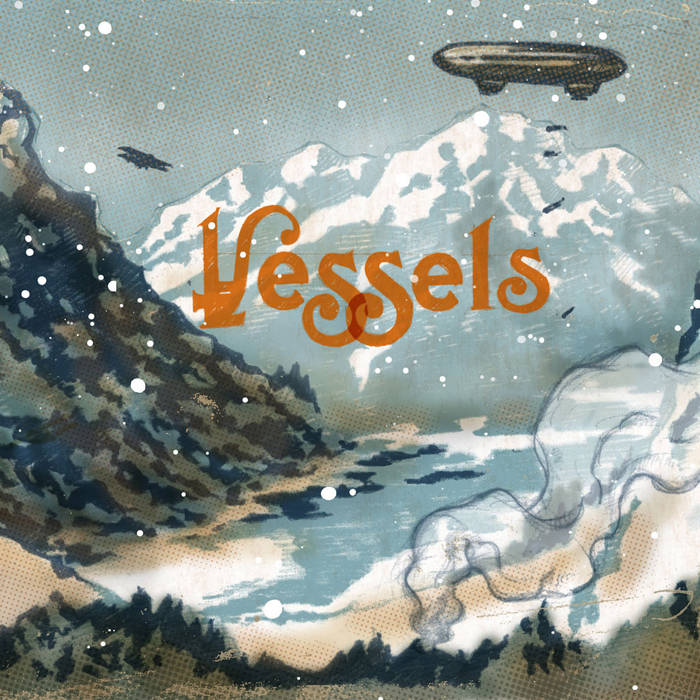 White Fields and Open Devices is the debut longplayer from Vessels. Much like a lot of their contemporary colleagues, the UK five-piece resort to the nebulous “experimental rock” tag to describe their sound, a term that really encompasses something different for each crew, and for Vessels, it means a bit of everything. Like, literally. Vessels prove to be an ambitious group by throwing in a bit of everything into this record. The main problem is, having a bit of everything comes at the expense of focus and cohesion, as opposed to the more ideal method of making the most little and being forced to craft something that’s not as artistically expendable.

White Fields and Open Devices does have a dominating sound and structure throughout its pieces, but there is still a resulting inconsistency present in the form of anomaly. What it does is it totally detracts from the listener discerning any aesthetic motives. For example, the dynamic contrast isn’t utilised but rather exploited, as though it were an interchangeable device for cathartic release that could really be used anywhere to elicit a big response from the listener, as in the case of “Altered Beast,” “A Hundred times in Every Direction,” and “Look at the Cloud!” Vessels don’t offer that all-important contextual justification for the presence of a quiet-loud dynamic shift, and its use as a mere catalysis really takes it for granted.

I’m not going to say that this was what Vessels intended, but just the fact that it comes across that way is enough to work against it. Like I said, the anomaly is what kills it and also annuls the whole quiet-loud, and when the primary facet is being counteracted then something about the composition needs to be scrutinised. It’s all about consistency. I don’t think, with the degree of intensity executed during the climactic parts of their pieces that it helps any of the other sound inclusions collect any merit in existing on the record.

Things are a tad smeared, on multiple levels. Whether it be the electronic flavouring added to such pieces as “Happy Accident,” “Trois Heures,” and the closing “Wave Those Arms, Airmen,” that’s spiced up with a bit of a glitch, or the solo piano that opens “Yuki” directly after segueless transition from the pandemonic conclusion of “Look At That Cloud,” or the irksome token quiet number  “Walking Through Walls” that includes both an electro and acoustic texture, or the bizarre math rock melodies in “Altered Beast” and “An Idle Brain,” somehow there is a ingredient that’s not allowing the rest of it to coalesce. Though Vessels may be striving for that elusive versatility tag, and I concede that there is certainly nothing more attractive than a work that’s eclectic but still focused and meaningful, it is elusive for good reason and remains very difficult to clinch. The risk run is that we’re left with mismatched components crammed into a sitting that rob the work of fluency like tense shifts and approximate rhymes.

Using everything over a discography demonstrates versatility, but on a single album it’s a mess. It lacks a deeper exploration of its chosen aesthetics, dishing out a variety of forms without substance, quantity over quality. Aesthetic disarray has to several consequences; the first being that it makes it damn hard to establish any character or distinctiveness, and the second is a lack of fluency and consistency in the actual listen for a listener, or at least, they will overwhelming selective about pieces.  This is the fate Vessels have bestowed upon their record. Any attempt to offer a succinct paraphrasing of what their music is like, it would go something like “a bit of math rock melody, some piano, a bit of computer generated beats, add in some emo vocals here and there, a hint of archival dialogue and then patch it all up with both loud and glittery guitar work.”

The feeling that comes across is that the band have yet to decide what they actually want to do, and this record is documents that hesitation. The one motif Vessels holds onto throughout the record is the dynamic contrast, cutting loose as a means of catharsis. It gets to a point, however, when the arrangement of other components becomes more significant, and the risk Vessels have taken with their catalogue of sounds on White Fields pays little dividend. But taking risks doesn’t automatically guarantee a reward, or else it would kind of defeat the admirable quality and purpose of risk taking. And although I’ve overstated that White Fields and Open Devices is, to my mind, a mediocre record, I also need to stress that the way its mediocrity has been constructed does not detract from the credibility of Vessels as a band, rather it proves that they could be a shitload better.