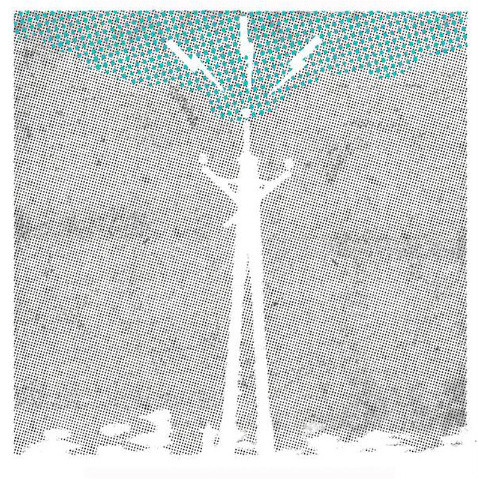 Earlier this year, I had a bit of a gibe at Seattle post-rock outfit Post Harbor for generic and predictable patterns in the presentation elements of their work. Admittedly, it may have come across as perhaps an ostensibly below-the-belt kind of criticism, the sort of criticism decried for its lack of relevance in drawing a substantial connection with the work itself. Little should’ve been read into that critique, since I levelled it more as a cultural statement rather than an artistic one, but if there were any merit in answering “yes” when asked the question “do the clichéd titles detract from the quality of the music?”—that is, to the logic I postulated against Post Harbor, then Wreaths’ Like Sparks From Throats Falling might just be the closest counterpunch that completely dismantles the theory.

Sure, the titles on Like Sparks do reek a little of post-rock’s manufactured profundity—Boomkat going so far as to allege that they were “inherited from the cluttered and convoluted nomenclature rulebook of post-rock”—but I make this statement as an acknowledgement, not a concession, of the value that aesthetic substance has over the superficial bits. And on that front, Wreaths delivers. The alias Michael R. Donaldson, the Newcastle-based project is another addition to the ever-growing new wave of drone-happy loopsters and sound artists making homes in surfacing micro-labels such as Hibernate, Dragon’s Eye or Home Normal. Aesthetically parallel to the sound artistry of powerhouse labels such as 12k and Room40, Donaldson’s use of drones, samples, textures shares in the likes of a plethora of contemporaries like Machinefabriek, Ian Hawgood and Seaworthy.

Using his sense of natural surrounding awareness, Donaldson constructs a variety of sonic templates which not only readily incorporate his processed samples and field recordings but are also sympathetic to all of its instrumental textures and timbres. In spite of its fairly multifaceted set-up, an emphasis on abstraction still lies at the forefront of Like Sparks. Mainly consisting of elongated harmonic tones, sprinkled with hints of delay, Donaldson’s modus operandi is exemplified on pieces such as opener “Nautical Almanac”, the grainy dramatic “Lying Lonely in a Field With One Thousand Radio Beacons” or the soft tonal drone tissue of “I Mean I’m Not Complaining, I’m Just, You Know…”, a piece whose buried chimes lump it under the Tim Hecker-officiated banner aptly described as ‘cathedral electronic music’.

Donaldson doesn’t turn exclusively to formlessness to construct Like Sparks, with a brief glimpses of guitar-churned melodicism on “Through Winter On Foot“, but his ambient calling is never too far behind. Guitar strums form the basis on “Seemed To Operate Like A Loss of Blood“, an incandescent and highly textural number with the loops containing glitchy pauses and the sharp piercing saw-like noises. A mandolin plucks some broken arpeggios on “O, Like Falling Snow”, or as a juxtaposing influence over the deep, eerie hums of “He Skulked Behind A Curtain, Yet…” The mandolin texture also evolves into an eerie ticking that provides the spinal chord “This Has Become A Trouble…/Fallen Buildings Falling“, a troublingly gorgeous epic ten-minute number that sees a harmonising lo-fi bass line working to gel together instrumental fragments and sampled industrial noises. Donaldson reveals another dexterity for the ballad-oriented not unlike that of ambient musicians like Keith Kenniff or Matthew Cooper on the closer “Cervine”, a short, crudely-recorded, fidelity-deficient piano number centering on an overly simplified melody.

I may have overwhelmed a little in the name-dropped comparisons to Wreaths, but this is more testament to the fact that Like Sparks From Throats Falling isn’t the easiest work to be lumped into a clear-cut pigeonhole within the ambient paradigm. Donaldson’s pieces are largely restrained, dynamically tame, and seemingly assembled on a basis of technical strength rather than artistic desire. The result is quite mature, offering a work that is versatile, malleable, enigmatic and abstract, yet never closed off or inaccessible. It will be interesting to see what Wreaths delivers in the coming years.